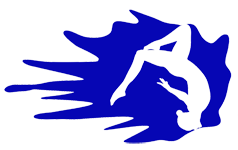 Imagine running constantly for up to 5 minutes whilst holding your breath, performing acrobatics, looking graceful and keeping time with music and your fellow athletes.  Welcome to the world of synchronised swimming where some of sport’s most highly trained athletes perform all of the above with great skill, flexibility, rhythm and flair.

Perhaps an easier way to envisage the sport is to think of ‘water ballet’, a name by which synchronised swimming was originally known.  Athletic moves derived from a core set of movements and positions are performed in water and choreographed to music to form routines which last anything from two and a half minutes to 5 minutes depending on whether a team, solo or duet routine is being performed.  Synchronised swimming is open to both male and female athletes but is dominated by women because the Olympic competitions are not open to men.

Routines are divided into the following categories:

In senior competitions, swimmers perform two routines for judges, one technical and one free.  Technical routines involve the performance of predetermined elements that must be executed in a specific order; free routines have no such requirements so swimmers are ‘free’ to be as creative as they can with their choreography in order to impress the judges.  There are also categories known as ‘figures’ where set movements are performed without music in front of the judges.  The aim is simply to impress the judges with the quality of execution.

Only team and duet competitions are currently included in the Olympic Games, though solos were included in 1984, 1988 and 1992.

Synchronised swimming involves several basic positions of varying difficulty and intensity.  The sport’s governing body, FINA, provides a list of internationally recognised figures as per the FINA manual which are allocated a category and difficulty tariff.  In addition the British Amateur Swimming Association (now Swim England) provides a few figures as part of its National Plan for Teaching Swimming, designed to introduce young swimmers to synchro’s basic movements, though these are not recognised by FINA.  Full details about the following are available on the FINA and Swim England web sites:

The choice of music is up to the swimmers themselves, and isn’t judged.  However, it should support the theme of the routine and the choreography is expected to mirror the tempo.

Underwater speakers are fitted into the pool so that swimmers can hear the music (music actually carries better under water than it does on land).

Competing swimmers have elaborate costumes to highlight or emphasise the theme of the music.  Costumes are not judged, nevertheless if a head-dress falls off an athlete in the British team they are fined because experienced athletes are expected to ensure that everything is securely fastened.

Make-up is used to highlight the swimmer’s features so that it is easier for the judges to interpret their facial expressions.  It is often quite bold, but should not be so theatrical that it is distracting.

Competitive synchronised swimmers must be extremely fit.  In fact, tests of Olympic athletes revealed that the synchronised swimmers were second only to the long distance runners in terms of aerobic capacity.  In addition to the hours spent working on routines in the pool, swimmers also undertake speed swimming to increase stamina, and land training in order to improve flexibility and strength and to ‘walk through’ practice their routines.