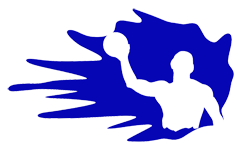 Team sports were first introduced into the modern Olympic Games at the 1900 games in Paris.  Water Polo was one of the first to be introduced and has been the only Olympic team sport to be ever present since.  A women’s competition was added to the Olympic programme in Sydney 2000.

The first set of rules for Water Polo were developed in 1885 by the Swimming Association of Great Britain, a precursor to the ASA (now Swim England).

Water Polo is a physically demanding game.  It combines speed and strength, as well as teamwork and a high level of fitness.  A single outfield player can cover up to two miles in a single game!

The game is simple.  There are goals at each end of the pool and the winner of the game is the team that scores the most goals by getting the ball between the posts, easy!!!

The Game and Basic Rules

Players aren’t allowed to touch the bottom or sides of the pool, having to tread water the whole time. Water Polo players use a leg kick called ‘eggbeater’, which is more efficient and effective than the normal action of treading water.

Players move the ball by throwing to a teammate or swimming while pushing the ball in front of them. Players can only use one hand to control the ball, other than the goalkeeper who can use both.  Two kinds of pass are typically used; the dry pass, where the ball does not touch the water, and the wet pass, which allows the receiving play to either pick the ball up from the water or swim onto and with the ball.

A match is split into four quarters of eight minutes.  The clock is stopped each time the referee blows their whistle and resumes when the ball is in play.  An average quarter lasts approximately 15 minutes.  Each quarter starts with a swim-off. The ball is released in the middle of the pitch with the players lined up along their own goal lines. The first team to reach the ball has the first possession of the game.

Each team has possession for a maximum of 30 seconds before shooting for goal.  If a shot is not taken within the 30 seconds, possession is handed over to the opposition.  After each goal, the team who conceded resume the match. All players for each team must be in their own half at the resumption of play.

Water polo matches have two referees with one stood on either side of the pool. The referees are in control of the game and are the only officials who can award fouls.

Water polo teams consist of 13 players. Each team is allowed to have seven in the water at any one time – six outfield players and one goalkeeper.  Except for the goalkeeper, players move continuously around the pool during a game.  Water polo players need remarkable stamina because of the considerable amount of swimming, holding, wrestling and pushing that occurs during the game.  As it’s such a fast game and can be quite draining, each team is also allowed a maximum of six substitutes.  Players can be substituted in and out of the game at any time.  The player coming in to the game can only enter the match at the following times:

Water polo is a contact sport. Fouls are common and are divided into two categories: minor (ordinary fouls) and major (exclusion fouls).

Another aspect of the game that players must be prepared for is underwater ‘shenanigans/antics’. Under the water, anything goes!  Players often grab, kick, and dunk one another and get away with it because the referees often cannot see the illegal actions due to white water, which develops as players move about in the pool.

Like other contact sports players have to be conditioned to cope with the physical aspects of the game. They also have to be very aware of what is going on around them or they may find themselves suddenly dunked at a crucial point.

Water Polo is a fast, exciting and enjoyable team sport to play and is a fantastic and fascinating sport to watch.